The central Taupō Volcanic Zone (TVZ) is a supervolcano. This system can have very small and short-lived eruptions, or more rarely, enormous super-eruptions.

According to local traditions tohunga Ngātoroirangi and rangatira Tia were both part of the Te Arawa waka fleet. They arrived at Lake Taupō at different times. Tia arrived first and he noticed that the cliff face resembled the rain cloak he was wearing. Tia named the cliffs Taupō-nui-a-Tia. Later on, the name was given to the lake.

In another version, Ngātoroirangi arrives to the area, and then asecends Tauhara mountain. While he is there he notices to the south, a mountain, Tongariro. On his way to the mountain he stops at a place called Hāmaria where he tells his followers, 'Let's rest and settle here for the night'. This gives rise to the name Taupō.

During this field trip you will follow the journey of Tohunga Ngātoroirangi. Ngātoroirangi and his sisters Te Hoata and Te Pupu were responsible for bringing fire to New Zealand from the ancestral homeland, Hawaiki. During his travels Ngātoroirangi encountered extremely cold weather. He called out to his sisters, who came to him from Hawaiki in the form of fire under the earth, appearing above the ground at intervals and creating the geysers, hot pools and volcanoes between Whakaari, White Island and Tongariro.

You can find out more about Ngātoroirangi in this interactive.

Taupō is a ‘supervolcano’ and one of the most frequently active rhyolite calderas in the world. The huge caldera (collapsed crater) has been partly filled by Lake Taupō, the largest lake in New Zealand. The caldera was created when the ground surface collapsed downwards due to the emptying of the magma chamber below.

The present magma chamber is between 6 and 8 km below the lake. Although Taupō Volcano has much more violent eruptions than cone volcanoes, they are much less frequent. It began erupting about 300,000 years ago and the present-day caldera was created by an eruption 27,000 years ago called the Oruanui Eruption.

Between this and the last ‘Taupo Eruption’ 1800 years ago, there have been at least 26 much smaller eruptions. These eruptions formed lava domes and spread pumice and ash over nearby areas.

The Taupō supervolcano system was created by subduction of the Pacific Plate below the Australian Plate. The movement of plates stretches the Earth’s crust. This stretching has led to a thinning of the crust in the entire Taupō Volcanic Zone. This allows magma to rise close to the surface causing volcanic activity.

The last major Taupō eruption is the most violent eruption known in the world in the last 5000 years. The eruption plume reached 50 km into the air, all of New Zealand received at least 1cm of ash and areas near the lake were covered in more than 100 m of pyroclastic flow. The flow spread up to 90 km from the vent and flowed over all local features except Ruapehu.

It is possible that ash from this eruption was the cause of red sunsets recorded by the Romans and Chinese.

Other Volcanic Hazards include:

Ready for a quiz? Try the "Taupō Supervolcano" activity.

Where else in the world are there supervolcanoes and what similarities do these areas have with the Taupō Volcanic Zone? 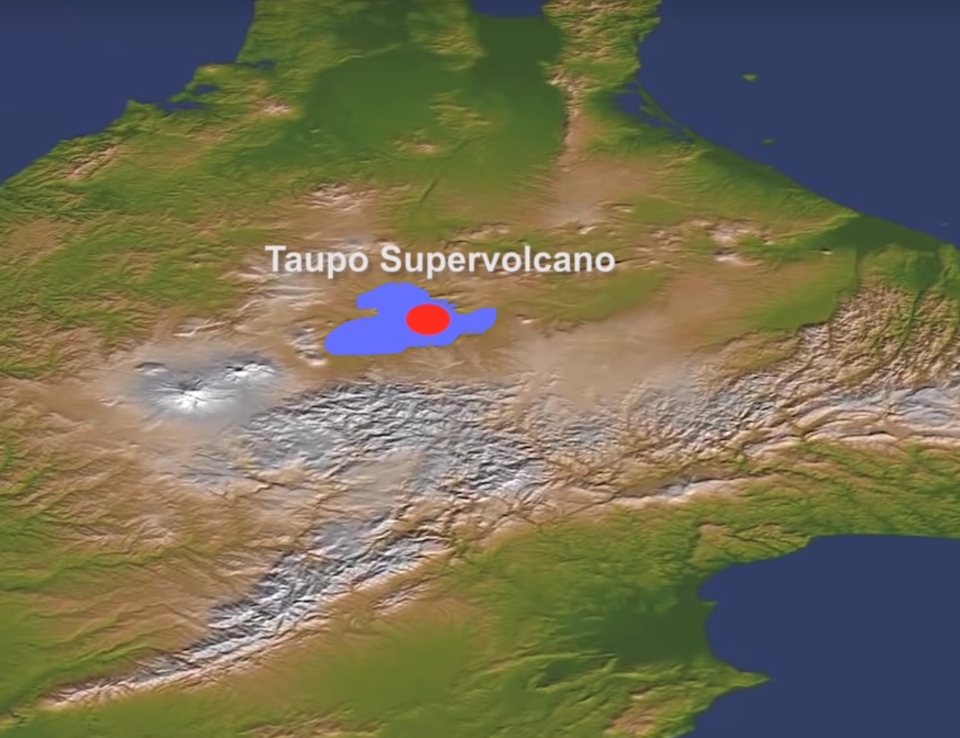 Taupō is a supervolcano and is one of the most active supervolcanoes in the world. Image: GNS Science. 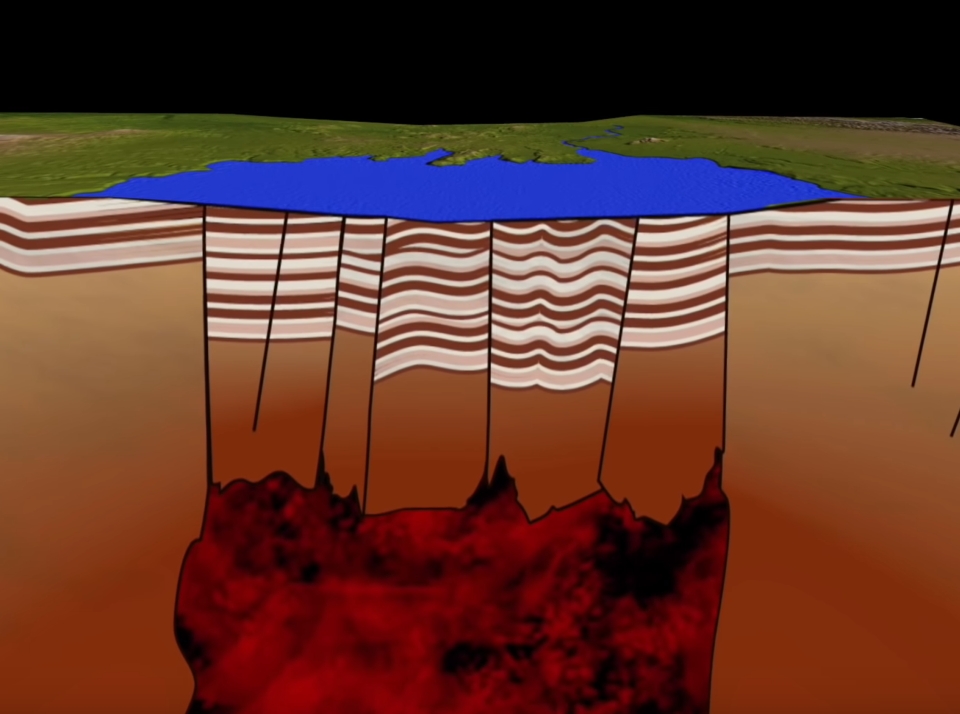 The magma chamber of the Taupō Volcano is between 6 and 8 kilometres below Lake Taupō. Image: GNS Science. 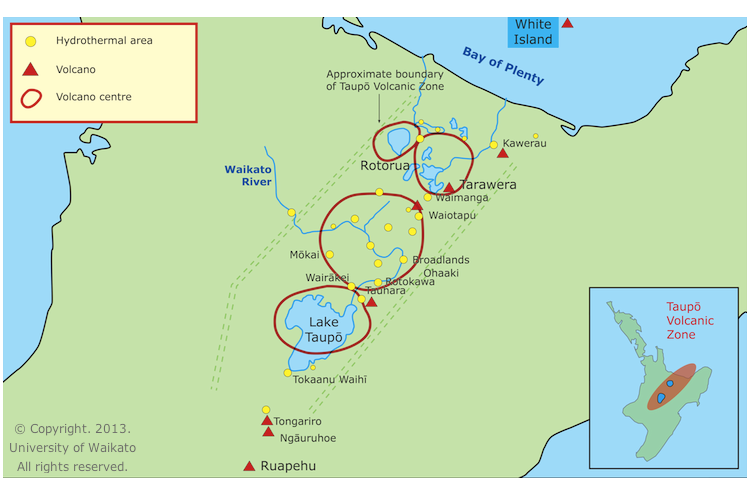 The Taupō Volcanic Zone (TVZ), extending from Mt Ruapehu through Rotorua to White Island, is the front of a wedge where the Australian and Pacific plates collide. Scientists think of the whole area of volcanic activity between Kawerau and Tokaanu as one single but complex supervolcano system. Image: Science Learning Hub.

A super-eruption 27,000 years ago formed a caldera that has partly filled to create Lake Taupō. Image: GNS Science.