A tsunami is a series of waves in the sea caused by a movement on the sea floor. New Zealand is at risk from tsunami because it has a long exposed coastline and sits on the ‘Pacific Ring of Fire’ where earthquakes and volcanoes are common.

The most common cause of tsunami is a shallow earthquake that displaces the sea floor. Other triggers include;

Sudden changes to the seafloor raises the water level locally and causes the ocean to flow away from the movement, creating waves.

In the open ocean, tsunami waves travel at 600kph to 700kph. In the deep ocean, waves from a large tsunami may be as little as 60cm high. They pass ships unnoticed. As they encounter shallow water, they slow down to about 30kph and increase in height.

In low-lying coastal areas waves can travel a long way inland. In parts of Thailand, the tsunami went 3km inland destroying almost everything in its path. In Banda Aceh, the tsunami surged 6km inland.

The seawater may recede a long way out, sometimes hundreds of metres, before coming back in as a tsunami. Tsunamis are not just moving lumps on top of the ocean surface, they also include hollows. Sometimes the hollow reaches the coast first. When this happens, the ocean first draws down and sucks water away from coastlines. It then rushes back in with enormous speed and force as the lumps arrive. People who notice the receding water have as little as five minutes to flee inland to higher ground. Other signs of a tsunami are a sudden rise or fall in sea level and hearing loud and unusual noises from the sea.

The power of tsunami

A tsunami is not just seawater. It picks up a huge amount of debris which gives it added destructive power. People don't die just from drowning; many are killed by being hit by debris and heavy objects in the surge. A retreating tsunami wave can cause as much damage as the first forward surge. A tsunami can exert huge forces against the side of a building. In Thailand, engineers calculated that modern reinforced concrete walls of hotels were blown out by tsunami waves.

No. A tsunami is not really a wave, it is a raging torrent of water that surges inland with enormous power - much more power than a surfer can handle. Besides the waves do not stop at the shore, so surfers may find that they crash into buildings or all the other debris caught up in the surging water.

Usually a tsunami is made up of a series of surges or torrents and equally violent return flow to the sea. The first wave or torrent of a tsunami is not necessarily the biggest. The second or third or even much later waves may be bigger. Intervals between waves can vary. It may just be minutes, or it could be more than an hour. 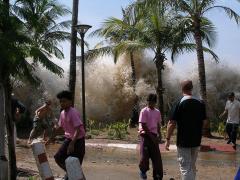 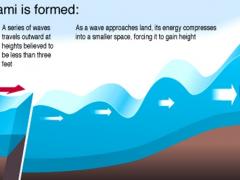 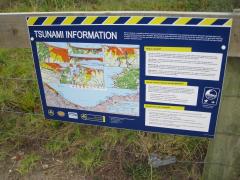