Drilling into a Volcano | LEARNZ
Skip to main content

Drilling into a Volcano

The Krafla Magma Testbed (KMT) will drill into the magma beneath the Krafla volcano. KMT aims to establish the first magma observatory – an international, open access, scientific platform to improve knowledge of magma and where it meets the solid crust.

To drill into the magma chamber of a volcano you need to know exactly where the magma is, so controlled drilling can be completed without causing increased volcanic activity or eruption.

This project was made possible when geothermal drilling in the area accidentally entered the magma chamber and the well was able to be lined, the magma controlled, and geothermal energy was produced. Prior to this people did not know that it was possible to drill safely into magma and maintain a stable well.

The KMT includes experts from 15 countries. The KMT will be a 25-year project involving experts in:

The Krafla volcano is an ideal place to complete this study because it has a long history of geological study, volcano monitoring, and drilling as well as supporting surface facilities. These factors will allow the safest and most efficient base to explore beneath the Earth’s surface. This project will:

This project will allow access to areas that have not been sampled before. Currently volcanic processes are studied from above and on the Earth’s surface. By drilling into the magma chamber samples can be collected and analysed regularly over a long period of time increasing knowledge of volcanic processes.

Drilling into magma has already been done safely. The next step is to drill into magma in a planned, scientific way. The findings from this drilling project could help better forecast volcanic eruptions in the future. For people living close to active volcanoes this could allow daily and weekly magma stability forecasts. These forecasts would inform at risk communities, and the aviation industry in real time, just as we awake daily to weather forecasts.

Magma is a lot hotter than rock, so can generate a lot more energy. The challenge is to be able to drill deep enough to get to the magma and to be able to keep the well stable in an ever-changing environment. It is hoped that this long-term project will lead to a number of geothermal wells and a reliable source of energy.

The challenges of drilling into magma

The high temperatures of magma are not something drilling technology has been designed for before. Previous accidental encounters saw temperature and pressure spikes and equipment failure, but technological advancement should make it possible.

Drilling into magma is not without risk. Puna Geothermal Power Station in Hawaii was one of the last places to encounter magma but this has now been overtaken with lava eruptions.

Ready for a quiz? Try the 'Drilling into a Volcano' interactive activity.

Can you find out more about how geothermal power is generated in Iceland and New Zealand? 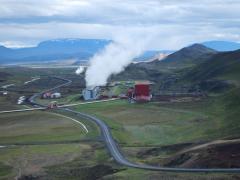 This is the Krafla power plant near Mývatn lake in Iceland. This area will be used for the KMT drilling project. Image: Petr Brož. 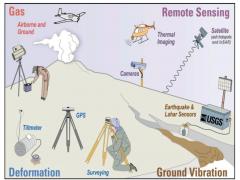 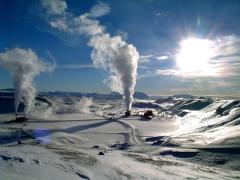 At Krafla Power Plant the Icelandic Deep Drilling Project drilled into magma and was able to harness high temperature steam which can be used to generate electricity. Image: Wikimedia, Ásgeir Eggertsson.