Volcanic eruptions can create many different and often simultaneous hazards. The type of hazard depends upon which volcano erupts and the nature of the eruption.

When a volcano erupts it will eject material into the air above it. Large material, such as rocks, will land close to the vent (ballistics). However, fine material like ash is carried long distances. The impact of ash fall on people and the environment depends on how thick the layer of ash is. Ash fall is likely to affect a large area.

If a large volume of volcanic debris is erupted quickly from a volcano the eruption column can collapse (a special type of landslide), like pointing a garden hose directly up in the sky. As the eruption column collapses it can change into an outwardly expanding hot, fast moving flood of gas and rock. This is known as a pyroclastic flow or surge. The flow direction can be changed by the shape of the underlying land.

Flows and surges often travel at speeds up to 200km/h, and cause total destruction of the areas they cover. Flows and surges may be very hot (several hundred °C) and can start fires. Some are cooler and can deposit sticky wet mud. Pyroclastic flows and surges are the most destructive of all volcanic activity. People caught in the direct path of a flow are unlikely to survive.

Lava flows are streams of molten rock that will travel down valleys on the slopes of volcanoes. The distance they travel depends on:

Basalt flows have low viscosity (flow easily) and have been recorded to travel more than 50 km from a volcano but usually only flow 5-10 kilometres. Lava flows will seldom threaten people's lives because of their slow rate of movement. However, lava flows will cause total destruction of buildings and other infrastructure in their path.

Lahars are “mudflows”- mixtures of volcanic ash, blocks and water that are formed on volcanoes. The source of a lahar may be a crater lake, a dam collapse or heavy rainfall washing ash from the slope of a volcano. Lahars are common with volcanoes like Ruapehu which have a crater lake.

Although warned of the collapsed bridge, the train driver was unable to stop the train in time and six of the carriages fell into the river.

Volcanic gases are mainly made up of steam (water), followed by carbon dioxide and lesser amounts of sulfur and chlorine compounds. Harmful concentrations of gases are present only very close to the crater (within 1-2 km). Away from the vent, gases are no threat.

A debris avalanche is the sudden collapse (landslide) from an unstable side of a volcano. Many volcanic cones are steep sided and unstable. Rising magma, earthquakes, and heavy rain can trigger a debris avalanche of this unstable material. An avalanche may evolve and continue to flow further down slope as a lahar. 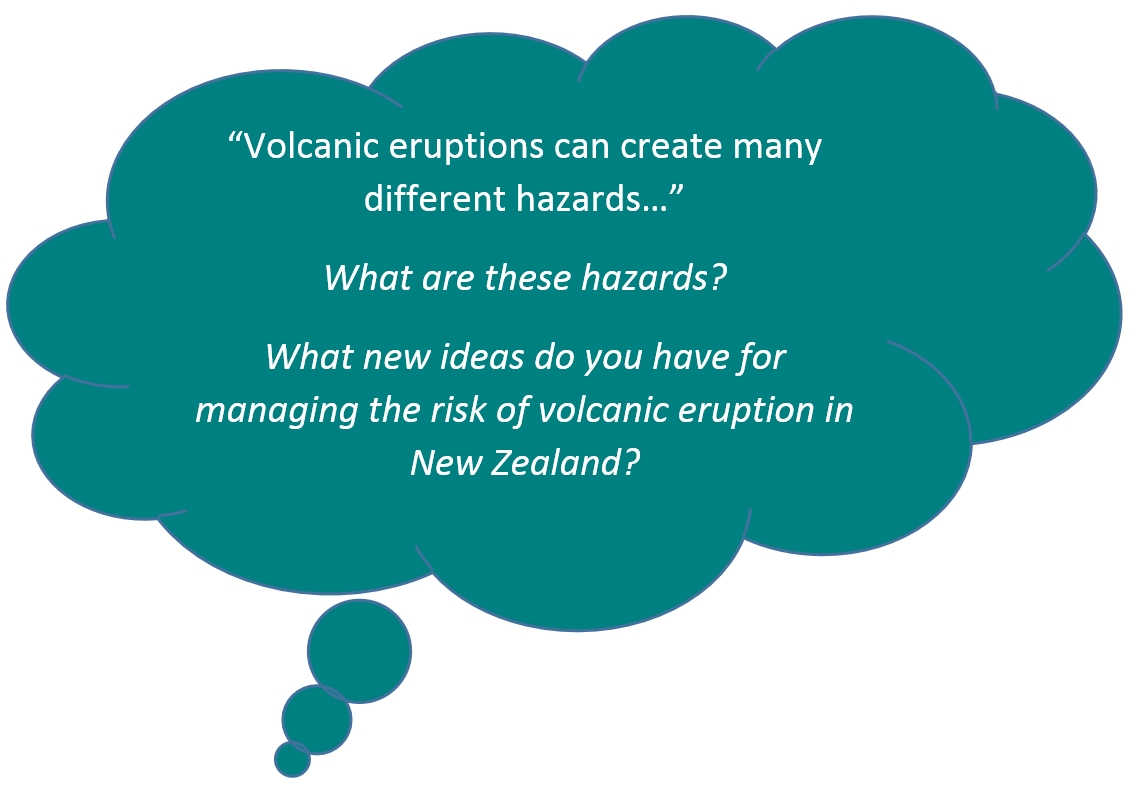 Tsunamis are seismic sea waves caused by large movements on the sea floor. They can be produced by:

A number of waves may be produced and they may travel a long distance. Volcanic tsunami may also be produced by landslides or debris avalanches flowing into the sea around an island volcano.

Earthquake or volcanic activity can trigger a decrease in the pressure of a geothermal system, this causes steam (hydrothermal) explosions to occur. Damage from hydrothermal eruptions is limited to within a few hundred metres of the vent. They do not produce ash clouds, but can deposit muds.

Ready for a quiz? Try the 'Volcanic Hazards' interactive activity.

Imagine living close to an active volcano. Create your own emergency plan to respond to an eruption. 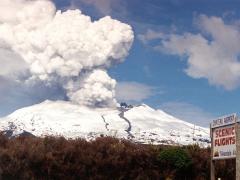 Mount Ruapehu is New Zealand's largest active volcano. Spectacular eruptions occurred during 1995 and 1996. What do you think are the impacts from eruptions such as this? Image: Civil Defence. 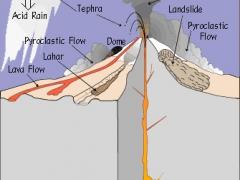 This diagram shows volcanic hazards. Can you put these hazards in order from most to least dangerous? Image: US Geological Survey. 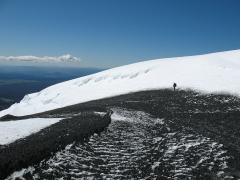 This is one of two lahars or mudflows following the 2007 eruption of Mount Ruapehu. How does a lahar form and why can lahars be dangerous? Image: GNS Science. 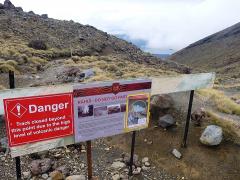 New Zealand's active volcanoes can erupt at any time. What warnings might there be before an eruption occurs? Image: GNS Science. 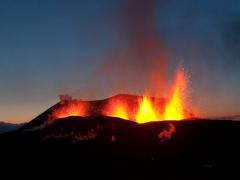 This is a strombolian eruption in Iceland, named after the small volcano island of Stromboli. These eruptions have short bursts of lava explosions. Why do you think this type of eruption is less dangerous than other types of eruption? Image: Wikimedia, Olikristinn.