Studying the active faults of New Zealand. This involves a combination of office and field-based studies including mapping and excavating across and near fault lines. These studies tell us about the location and activity of our active faults that generate large earthquakes.

Completed a PhD at the University of Oregon and returned home to New Zealand to work on New Zealand problems. Have experience overseas in Turkey, Mexico, USA and several other countries.

Studying faults in the field, using the skills honed at university such as geomorphology and mapping.

What I am working on now:

Writing up the results of several Alpine Fault studies; these are so relevant as the next Alpine Fault earthquake is inevitable.

A quick story about a job well done:

Recently I opened a trench across the Alpine Fault which helped locate the fault with respect to the DFDP (Deep Fault Drilling Project). This was quite satisfying as it will help prove further funding for Phase 3 of the DFDP.

A (humorous) story about a job that went badly and what you learned:

Recently we got into the field (finally) to a landslide-dammed lake in eastern Marlborough near Kaikoura. I say finally because we had to delay the project twice due to bad weather conditions which did not allow the helicopter pilot to fly us in to the site. On the 3rd attempt we were being thwarted by the aftermath of Cyclone Pam. Finally we realised that maybe the pilot was what was holding us up, so we had to change operators…in the end the project ran smoothly from there.

Watch the video where Rob talks about his work (25 Mb mp4 file). 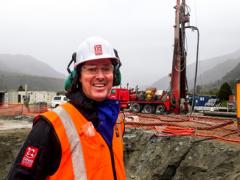